Better men have been through worse.

It’s only after we’ve lost everything that we are free to do anything.

To the Hungarian Prosecution Service, Prime Minister Viktor Orbán, as well as other decision makers, regarding the extradition and asylum case of German citizen and lawyer Horst
Mahler:

Horst Mahler has already been imprisoned for over 10 years, a punishment which far exceeds even that of brutal crimes of violence. The internment has been hard on the elderly mans health, amongst other things he has had to amputate a leg because of afflictions sustained whilst in prison. The only ”crime” Horst Mahler is guilty of is a so called thought crime, of a political nature. Mahler has not in any way hurt another human being or committed any another kind of criminal act. He has only held and expressed a political view which goes against that of the current German regime.

Because of his opinions, the German regime wishes to put Mahler back in prison once again. This imprisonment would, if carried out, most likely be the same as a death penalty for Mahler, who, according to the expert opinion of doctors, would probably not survive being deprived of his freedom for a longer period of time.

Does a man deserve to die because he holds beliefs which are not shared by the establishment?

The Nordic Resistance Movement deems that the German regime is comprised of criminal traitors, who abandon both human rights as well as those fundamental, democratic ones which they claim to protect.

In an upside down world, controlled largely by a small, self-appointed Zionist elite, Hungary has previously shown signs of being both strong and independent. With this case comes yet another test, which will determine in which way these signs are to be interpreted. Is Hungary yet another vassal state under globalism? Or is Hungary in actuality an independent state, which takes matters of fundamental rights seriously, can distinguish between right and wrong, and act accordingly? Is Prime Minister Viktor Orbán just another racetraitor among others, or is he a true leader and a man of dignity?

The Nordic Resistance Movement demands that Horst Mahler is released, and that he is granted asylum in Hungary, so that he may live out his remaining days in peace and quiet and dignity,
without being hunted down like a criminal.

Today’s treacherous governments will not last forever, but will in time be replaced by sound, nationalistic powers, who want what is best for Europe and for the European peoples. Does
Hungary want to portray itself as friendly toward the sovereign political leaders of tomorrow, or does it sell out in favor of yesterday’s stale, dictatorial rulers? 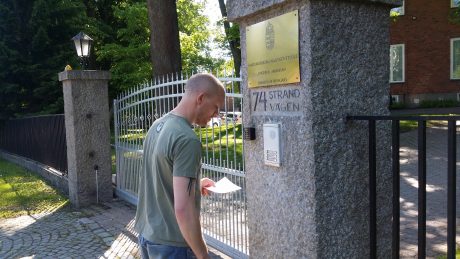