Those who are most sensitive about ”politically incorrect” terminology are not the average black ghetto-dweller, Asian immigrant, abused woman or disabled person, but a minority of activists, many of whom do not even belong to any ”oppressed” group but come from privileged strata of society.

NORDIC RESISTANCE MOVEMENT. Now you can listen to the speeches from the demonstration on November 12.

The demonstration on November 12 was a great success for the nationalist movement in Sweden. 700 people joined the rally under the slogan ”Stop the foreign invasion”.

We have published a number of clips from the demo, among other things the rally as a whole and skirmishes with the police.

During the the day there were six speeches. Below you can listen to the speeches with English subtitles and read a short description of each speaker.

Pär Sjögren, 36. Nest leader in the Resistance Movement and stand in on the Borlänge municipal council. Responsible for arranging the demonstration in Stockholm.

Sjögren’s speech concerned the social decay in Sweden and the disastrous consequences of multiculture and mass immigration.

Pär Öberg, 45. Leader of the Resistance Movement’s parliamentary branch, press spokesman for the organization and member of the Ludvika municipal council.

Vera Oredsson, 88. The grand old lady of Nordic National Socialism. She grew up in National Socialist Germany and came to Sweden, with her brother and their mother, on the white busses in 1945. 1960 she joined Nordiska rikspartiet (NRP) and two years later she became the party secretary. That same year she married Nordiska rikspartiets leader Göran Assar Oredsson. In 1975 she succeeded Göran as party leader and thus became Sweden’s first female party leader. Despite being 88 years old she is still engaged in the struggle for our people’s survival and future.

Oredsson talked about growing up in National Socialist Germany and her life-long struggle for our people. 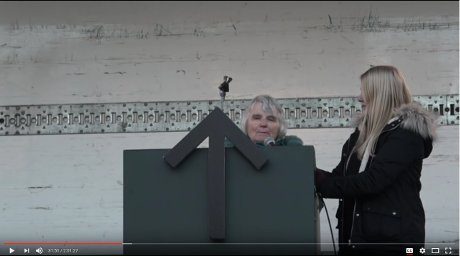 Jörgen Kromann, 66. Before he became a nationalist he was an active communist in Sveriges kommunistiska parti (SKP) and Kommunistiska Förbundet Marxist-Leninisterna (KFML) which was a splinter group from Vänsterpartiet kommunisterna (now Vänsterpartiet, the Left party).

Kromann, among other things, spoke of his earlier work as a communist and how he, like Vera, has seen Sweden change into a multicultural melting pot. He made it clear that the nationalist opposition is the only true popular movement in Sweden and that the left of today is fully on the side of the globalists and high finance. 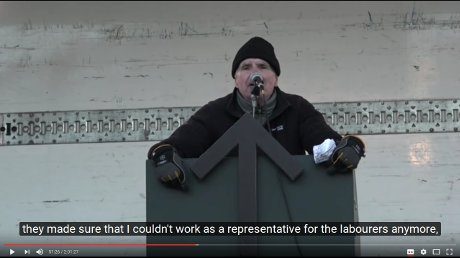 Vejdeland’s speech was about Jewish media and its control over popular opinion, as well as how it created and maintains the multicultural society in Sweden. The main target of the speech was the Jewish Bonnier family which, through its media empire, even tries to control how state media will engage with Swedes critical of mass immigration. 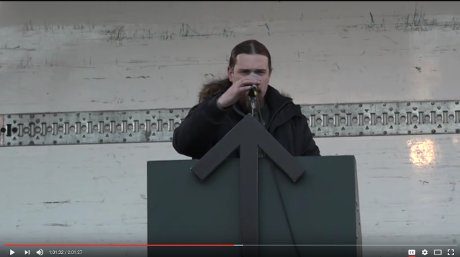 Simon Lindberg, 33. Lindberg is the leader of the Nordic Resistance Movement. Lindberg became a National Socialist in his teenage years and has since that time dedicated his life to the Nordic racial struggle.

Lindberg talked about bad excuses for not participating in the struggle and that everyone must become organized and do their part. To stop the invasion of foreigners it is not enough to participate in a demonstration, the struggle is fought every day. Lindberg also talked about peoplehood, the foundation of national socialism, which must be inoculated in the Swedish population to counter the zionist divide and conquer strategy. The foreign invasion is a key part of this strategy. 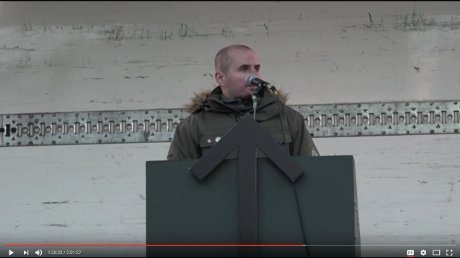