Those who are most sensitive about ”politically incorrect” terminology are not the average black ghetto-dweller, Asian immigrant, abused woman or disabled person, but a minority of activists, many of whom do not even belong to any ”oppressed” group but come from privileged strata of society.

Never lose hope, be persistent and stubborn and never give up. There are many instances in history where apparent losers suddenly turn out to be winners unexpectedly, so you should never conclude all hope is lost.

Man cannot remake himself without suffering. For he is both the marble and the sculptor.

GOTHENBURG. The Nordic Resistance Movement’s meeting in Gothenburg gathered about 650 participants, while nearly 200 people were denied by the police to participate. In addition, Nordfront’s live broadcast was seen by 160,000 people.

The Nordic Resistance Movement’s meeting in Gothenburg on Saturday did not take place as smoothly as the earlier demonstrations in Borlänge, Stockholm and Falun. But as we summarize the day, we can still say that the meeting, after all, became a major success for the nationalist opposition.

Before the actual day, the mainstream media made the name ”Nordic Resistance Movement” known to the entire population. During the day, Nordfront TV’s live broadcast was trending as the second most viewed clip on Youtube in the world. 11,000 people actively watched the broadcast and in total 160,000 people has seen the broadcast on the first day. 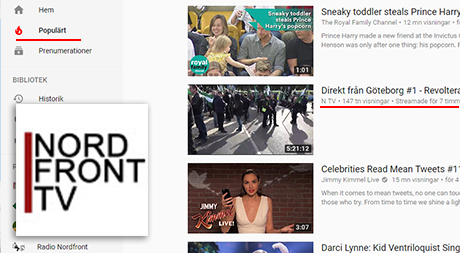 The meeting gathered 650 participants, which makes it the biggest national gathering in Gothenburg in modern times. In addition there was the 30 people from Denmark, Germany and Portugal who could not get in and the approximately 150 people gathered at the police’s designated assembly site who could not join the others.

More than 800 people thus intended to participate, despite the threat of the police to imprison protesters as well as the mainstream medias incitement to violence.

Avoiding the trap – there was no new Charlottesville
The resistance movement gathered at 11:00 at Ica Maxi in Almedal, two kilometers away from the gathering location that the police had advised at 12:00 at Skånegatan. Nordfront believes that there was never any plans from the activists to get to the police’s blocked PL24 area, as this route seemed like a trap that the police leadership hoped would lead to a new Charlottesville.

We also received indications from an inside police source that the police had planned to trick us into the PL24 area and arrest most of the demonstration’s participants, which also was confirmed in mainstream media afterwards. 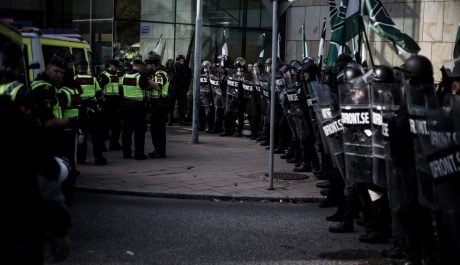 The route was supposed to end at the police station next to Ullevi, and before that, at Heden, passing through the area where left-wing extremists (Antifa) had gathered. Due to the police authorities’ initial threat of imprisonment of all free-thinkers, it was obvious to many that the police would let the stone-throwing left come close enough to the demonstration to get a pretext to seize patriots when they would defend themselves from the attack. The route was optimal for the police to quickly transport the demonstrators into custody.

In addition, the proposed 600m distance was a direct mockery of the protesters and their constitutional rights.

Several activists and policemen were injured mildly and 15 people, including the Nordic Resistance Movement’s leader Simon Lindberg, were arrested for violent riot. A female Nordfront photographer was also arrested for being guilty of ”violent riot”. 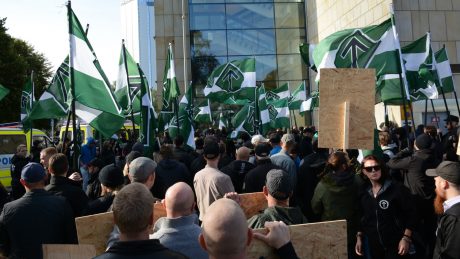 The police banned the demonstration – but the Resistance Movement held a meeting
Following this incident, police officers could decide to ban the demonstration and thus completely restrict freedom of assembly. However, since the confrontation occurred outside the police PL24 area the police’s plans was disrupted and made it more difficult to arbitrarily grab participants in the new location.

After a while, the Nordic Resistance Movement decided to speak at Liseberg Station. Pär Öberg and Fredrik Vejdeland from the Nordic Resistance Movement’s High Council held speeches. Resistance movement leader Simon Lindberg was also considered as a speaker, like Julian Bender from the German party Der Dritte Weg. But Lindberg was then under arrest and Bender had been denied by the police to attend the march. According to Bender, he was also put under a three-year ban on entry into Sweden (!). 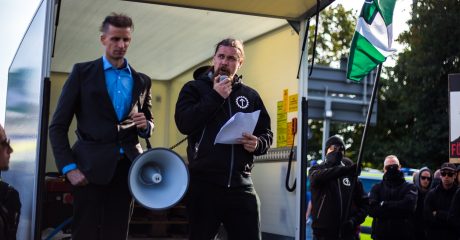 This unprovoked attack filled the participants with such wrath that the situation threatened to completely unravel before the mood prompted the police to back away. It is noteworthy that several policemen were apparently ashamed of the conduct of their colleagues, and in a few cases, also expressed this openly. Several policemen we spoke to or as we heard discussed among themselves was saying that none of this had happened if the police leadership had let the Resistance Movement carry out the demonstration that the organization and the police agreed upon from the outset.

Reassembly
At 17 o’clock, two hours after the demonstration was supposed to end, the Resistance meeting ended and participants returned to the reassembly area.

Summation
The demonstration in Gothenburg shows that there are about 800 patriots in the country that are prepared to demonstrate under very difficult circumstances; against a hostile police force that has thousands of police officers, against a propaganda device in the media that calls for blood, and against the crew of left wing extremists who are in principle being licensed to attack their opponents.

The prelude to the demonstration shows that the system is in total panic and is ready to try and enforce an organizational ban and restrict the rights of ethnic conscious Swedes for the purpose of stopping the growing opposition.

Finally, it shows that there is no sense to seek permission to demonstrate, something that the Nordic Resistance Movement’s Pär Öberg pointed out to Nordfront TV after the demonstration. Two weeks ago, the Resistance Movement held an unannounced demonstration in Gothenburg, which was held in perfect order mainly because the police did not know about it and therefore could not sabotage it.

The Nordic Resistance Movement thanks all the heroes who participated during the day and sends greetings through Nordfront that we will come back to Gothenburg – maybe in the near future.