The things you own end up owning you.

NORDIC FRONTIER. This week Matthew Heimbach joins the crew at the Nordic Frontier. He tells us about his struggle, his awakening to the world around him and about the promising future of the Traditionalist Worker Party. 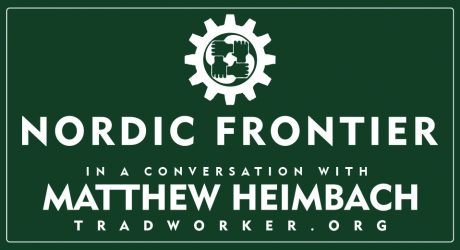 We start off the show with discussing the aftermath of #LastNightInSweden, the panic in the media and the hysterical concern for addressing ”fake news” on the internet. The local propaganda rag, the nationwide Jewish press and the government officials are all struggling alike with keeping the narrative from free-fall collapse.

After that we discuss Tim Pool’s recent visit to the multicultural paradise of Rosengård, Malmö. There he meets Swedes and Arabs that live in harmony with each other, with racially mixed children and a religion of peace.

We then present another gruesome Black Pill. A woman that gave birth to her daughter, in the car, on the highway, in freezing cold winter. All because the treacherous politicians of Sollefteå municipality has decided that they don’t need a local hospital.

We top the hour off with introducing the slogan of the upcoming demonstration in Falun, Sweden on the first of May 2017. We encourage everyone to join us in taking back the Worker’s Day from the Social Democratic traitor scum.

After the music break we get into talking to our special guest for the evening, Matthew Heimbach. We ask him about what it was like growing up in the South, finding his racial identity and realizing the Jewish question. Later we delve into politics and talk about the forming of a white student union, the Traditionalist Youth and the Traditionalist Worker Party.

Music played on the show:

Paddy Tarleton – Faces in the Water

Can you spare a coin for a National Socialist Nordic Nation?

Support Radio Nordfront:
Can you spare a coin for a National Socialist future?
Bitcoin: 1AJiMVvWvSc7eShqEvHa7mufkNne4CnhQa
Paypal: Donate through Paypal.

Listen to the podcast:

Listen to ”Nordic Frontier #08: In a Conversation with Matthew Heimbach” on Spreaker.