Hitler will emerge from the hatred that surrounds him now as one of the most significant figures who ever lived.

The rational question–‘Who appointed you? Who gave you the authority to act in this sphere?’ – is one that a Jew does not ask himself.

This is the true joy in life, the being used for a purpose recognized by yourself as a mighty one; the being thoroughly worn out before you are thrown on the scrap heap; the being a force of Nature instead of a feverish selfish little clod of ailments and grievances complaining that the world does not devote itself to making you happy. 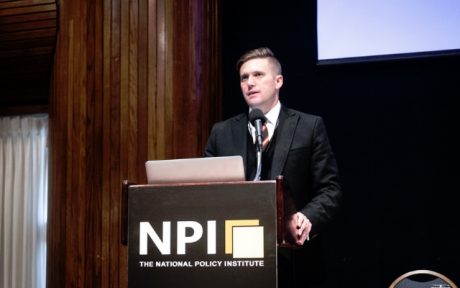 My name is Sherry Spencer, and I am Richard Spencer’s mom. I’m a resident of Whitefish, Montana, and am the proud owner of a beautiful mixed-use facility in town.

It was years ago now that I first broke ground on the building, which features vacation-rental apartments and office spaces. I hired a local architect and builder to bring my ideas to life — and both exceeded my expectations.

I am the sole owner of the facility. It was built, not just with my capital, but with my ideas and sensibility. The apartments even include my original artwork, and the rooftop garden features my ceramic mural, which celebrates the Whitefish Winter Carnival.

In other words, I poured my heart and soul into this project.

The building opened in late 2015, and received wide acclaim from the local press. And the vacation apartments have been enjoyed by people from around the world.

I had no intention of selling . . . until I started receiving terrible threats in the last couple of weeks.

On November 22, Gersh and I spoke on the phone. She relayed to me that if I did not sell my building, 200 protesters and national media would show up outside — which would drive down the property value — until I complied. Gersh’s other conditions included that I make a public denunciation of my son in a statement written by the Montana Human Rights Network and that I make a donation to this organization from the sale of the property. As Gersh announced on Facebook, she was “spear heading” the campaign.

Gersh followed up on her conditions in a number of emails, which I’ve just made public. She even shamelessly suggested that she act as my realtor! In other words, she and the local “human rights” organizations appeared to seek financial benefit from threats of protests and reputation damage. The same day Gersh first contacted me, I received a sales offer, even though I had not expressed any intention to sell, nor had anything been publicized.

One renter reported to me that Gersh threatened her business with boycotts unless she moved. This renter also alleged that Gersh called her “collateral damage.” As the manager of the property, I employ a number of local maids and other maintenance personnel, who would lose their jobs if I were to sell. More “collateral damage,” I guess.

I never wanted to go public with this story. However, the fact that so many news outlets have reported on it forces my hand.

Whatever you think about my son’s ideas — they are, after all, ideas — in what moral universe is it right for the “sins” of the son to be visited upon the mother?

All I wanted to do with the building was help Whitefish.

The people attacking me claim that “loves lives here.” Now it’s time for them to show it.

I strongly urge that everyone stays within the bounds of respectful, civilized discussion of this matter by refraining from abusive comments or targeted harassment of any of the parties involved, or their families. I disavow the harassment that anyone faced as a result of these events first being brought to light by the media even prior to this publication of my side of the story. After all, my own family and I have faced — and continue to face — numerous threats and bullying on social media as well.